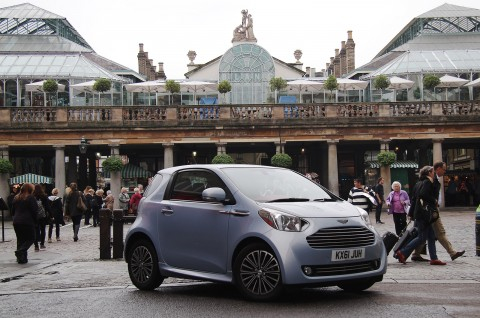 It is entirely to his credit that despite the hand-bagging that he fully expects his car to receive, Duncan Johnson is still sufficiently game to lend me his Aston Martin Cygnet.

Unless you count things like the Tickford Metro, there has never been a car like the Cygnet and I suspect that it’ll be a while before there is again. Despite being, in real terms, the cheapest car ever to fly the Aston wings, it seems that to call sales glacial would be to insult slow-moving mountains of ice.

Although Aston goes all coy when you ask how many it has sold since the Cygnet went on sale in 2011, speculation suggests it was considerably less than 1000, and we do know that there are just 143 on UK roads, making it even less popular in its homeland than Aston’s biggest ever turkey, the late-1980s Virage.

Then again, Aston’s smallest ever turkey is not an Aston at all. Looking at it brought to mind those poor children in the US whose ghastly parents think that slathering them in make-up and entering them into beauty pageants is somehow consistent with them growing up into well-adjusted adults. Toyota provided the child in the form of an entirely blameless iQ. Aston Martin applied the slap.

I use the past tense because the Cygnet project is no more, and having never had the pleasure when it was new (inexplicably, no car was available), I still wanted to know what provoked Aston Martin to cosmetically reconstitute a 1.3-litre Toyota city car.

There was another reason, too: Duncan Johnson paid £15,000 for his perfect two-year-old Cygnet, which is very little more than you’d pay today for a new top-of-the-range iQ. At that level and given that, in the UK, Cygnets are outnumbered two to one by Mercedes-Benz SLSs, could it possibly even be a buy?

I was getting ahead of myself. At the time of the Cygnet’s creation, Aston boss Ulrich Bez provided us with three reasons for its existence, and it is fair to say that the first – Aston’s need for a sustainable product line-up – has not gone according to plan. No manufacturer launches a car intending it to spend fewer than three years in the marketplace.

The second was the desire to satisfy demand and, in this regard, the Cygnet has clearly succeeded insofar as anyone who wanted one could have one, at least once Aston abandoned its highly courageous original position of offering them to existing Aston customers only. Unfortunately, there just weren’t very many of them.

The third reason quoted was the need to reduce the average emissions of the Aston fleet ahead of ever more punitive environmental legislation being introduced around the world, which it undoubtedly would have done had it hung around long enough to finish the job. Now that the Cygnet has gone, I suspect more than ever that the recently announced ‘technical partnership’ with AMG is a mere harbinger of a much closer association with or even acquisition by Mercedes-Benz.

I digress. In every mechanical detail that matters, the Cygnet is a 1.3-litre iQ available with either six manual gears or a CVT transmission. To justify more than doubling its price to that of a Range Rover Evoque, Aston painted the car and trimmed the interior in Alcantara honeycomb and the same hide used for the DB9.

It also provided its own grille, badging and slightly redundant bonnet vents and refaced the instruments to make them like all Aston dials – as beautiful to look at as they are tricky to read.

The marriage of aristocratic Aston Martin to an artisan Toyota in this way is one of the more unlikely back-of-the-bike-shed liaisons of recent times, but it almost works. In fact, if one of the intended draws of the Cygnet was to get its owner noticed around town and in a positive way, it succeeds beyond all expectation.

Every time we parked, there were appreciative stares. Every time we needed to squeeze into a flow of traffic, Londoners – even taxi drivers – fell over themselves to make space for us. Forget a turning circle that’s tighter than a Smart Fortwo’s; the ability to charm those with whom you share the street is an incalculably more valuable weapon to wield.

But so, too, are there problems, not least that the Cygnet is not and never was exempt from London’s congestion charge despite the existence of iQs that were, at least until the exemption limit was reduced this summer. I think Aston assumed its customers would just want the more powerful 1.3-litre motor, despite the 1.0-litre’s double-digit CO2 figure. They would, after all, be rich enough to pay. To me, that is hardly the point. I know a wealthy man who gets up early just to avoid the charge. It’s not that he’s mean. He simply objects to paying it.

The next issue is that the Cygnet is not good enough to drive, a forgivable facet of a £10k Toyota but not a £30k Aston. I don’t seek to criticise the Cygnet for an inability to do 200mph or execute 100-yard powerslides. More relevant is the fact that the engine is characterless and lacks the low-down torque that you need to squirt into traffic.

The six-speed manual gearbox in Duncan’s car is quite notchy, too. However, most prejudicial to your cross-town progress is the Cygnet’s width – it’s 2mm short of a Volkswagen Polo, in fact – so you can forget about darting through gaps that only those on motorbikes would normally consider.

None of this condemns the Cygnet or even explains, other than in part, why it failed. I think the real reason is simple and obvious, at least with the benefit of hindsight: it failed because it was unable to command credibility even at its price point, let alone as an Aston Martin. I could put on a Brioni suit and pop a Walther PPK in my pocket but it wouldn’t make me James Bond, just some bloke who wanted to be.

The Cygnet is an iQ with delusions of grandeur, strutting about in fancy dress, fooling no one other than the person who wrote a £30k cheque for it in the first place.

And yet… I was struck by what a warm reception it was granted by London and the fact that, despite spending many hours in presumably the most Cygnet-rich environment on earth, I never saw another.

Indeed, this is the first Cygnet I’ve ever seen, other than cars I’ve known to belong to Aston Martin. It is an incredibly rare thing. And before my day with it, I’d have said deservedly so. At £30k with the car still in production, it made little sense.

But at £15k for a very rare car that’s only going to get rarer, one with just 9000 miles on the clock and feeling indistinguishable from new, it is a very different proposition indeed. For the avoidance of doubt, I don’t want one and wouldn’t even if I lived in London.

But for the first time since I heard of this strange little thing called the Aston Martin Cygnet, I now understand why someone might.