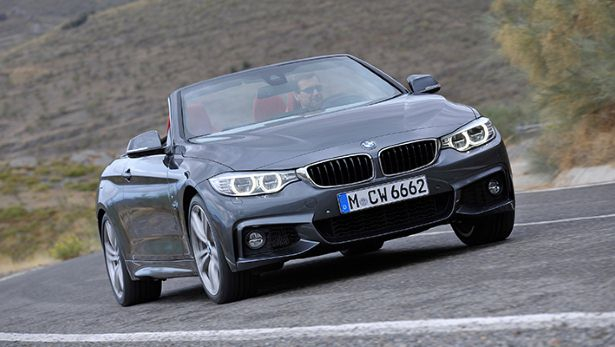 Barely four months since BMW officially put the axe into its ubiquitous two-door with the new 4 Series Coupe comes this, the new BMW 4-Series Convertible.

And just like its coupe counterpart, this one is lower, longer and wider than its predecessor, with BMW claiming it to be a “more overtly sporting car” than before. As you can see, it follows the fine form set by the 4-Series Coupe, all massive kidney grille, hexagonal headlights, huge air intake and Hofmeister kink.

Of course, this one comes with a three-piece folding metal roof that can be raised or lowered in 20 seconds at speeds of up to 8mph, while we’re told – wait, what? 8mph? Yes, improvements to the roof – including a new sound-absorbing headliner – mean wind noise levels have been reduced by 2dB, but seriously, 8mph?

Anyway, underneath you get the same chassis as the 4-Series Coupe, but in this iteration, the springs and dampers have been retuned, with adjustments made to the camber angle, track and roll centre; there are extra-wide supports and mounts on the wheel carriers for track and camber, slightly repositioned pivot points, stiffer control arms and axle subframes together with ‘thrust arms’ connected to the suspension to give a sportier setup.